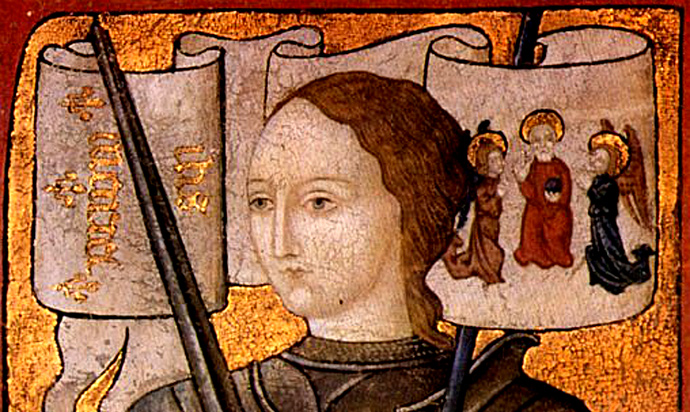 In around 1425, "voices" told her to drive the English out of France and to get the Dauphin Charles crowned. Delegitimized by the treaty of Troyes, Charles was hesitant to claim his authority.

This was the situation in which Joan left  Vaucouleurs in February 1429. She managed to cross enemy lines and got to Chinon in 11 days. There she met Charles VII, twice. She confirmed to him that her "mission" was to free Orléans, besieged by the English, and to lead him to Rheims to be crowned.

After the liberation of Orléans on 8th May 1429, she met Charles VII at the royal residence in Loches on 22nd May 1429. She convinced him to take to the road to at last be "graciously crowned". The coronation took place on 17th July 1429. Charles VII was now a legitimate king of France. Joan continued to fight in the army until she was captured in Compiègne in May 1430. She was sold to the English and judged in Rouen at a trial overseen by Pierre Cauchon, bishop of Beauvais.

Joan answered her accusers with patience and poise, some would say with insolence. Sentenced for "heresy, apostasy and  idolatry", she was burned at the stake on 30th May 1431, on Place du Vieux Marché. A review trial took place in 1456-1457 and exonerated her of her supposed "crimes".