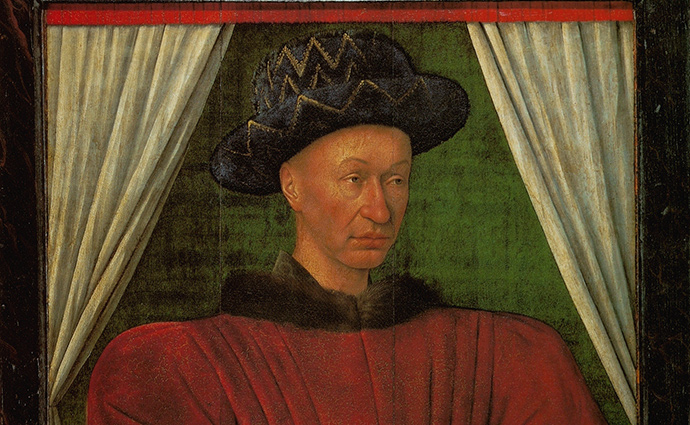 Portrait of Charles VII, king of France 1422-1461. France, anonymous, 20th century, in the words of Jean Fouquet, around 1450. Royal City of Loches/Indre-et-Loire Council.

Upon the death of his older brother, he became Dauphin in 1417 and reigned for nearly 40 years. His father, King Charles VI "the Mad", was incapable of ruling. Civil war raged between the Armagnacs and Bourguignons in their power struggle.
The 1420 Treaty of Troyes compromised the Dauphin’s future by handing the French kingdom over to the English. When King Charles VI of England died, Henry VI was proclaimed "the heir of France". That said, Dauphin Charles, who had sought refuge in Bourges, acted as King of France but just owned the lands south of the Loire.

Joan of Arc helped Charles VII turn the situation around and he was crowned in Reims on 17th July 1429. He then reconquered the land north of the Loire and won the Battle of Castillon, ending the Hundred Years' War in 1453. He also re-established the kingdom's economy thanks to the silversmith, Jacques Coeur.

Charles VII often stayed in the royal lodge and had both the tower gate and the new keep tower built. He was married to Marie of Anjou and they had a son, Louis XI.