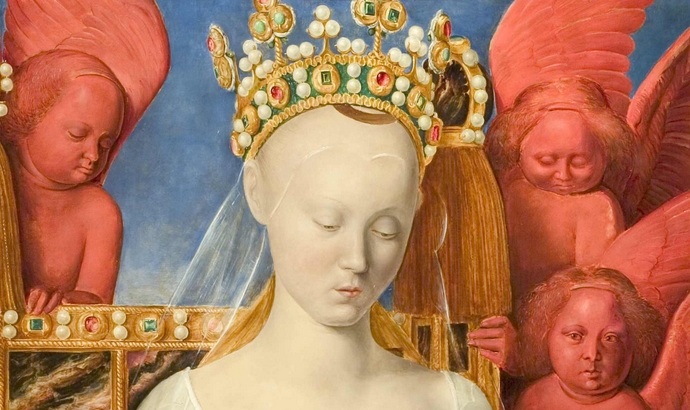 Portrait of Agnès Sorel, the Melun Diptych, France, anonymous, 20th century, in the words of Jean Fouquet, around 1452-1455, Royal City of Loches/Indre-et-Loire Council.

She was one of the Duchess of Lorraine and Duchess of Anjou Isabella’s ladies in waiting and caught the attention of Charles VII, who was 20 years her senior, in around 1443. She then joined the Queen Marie of Anjou’s service.

Agnès Sorel soon gained the status of official favourite, a new title in the royal court. She brought a breath of fresh air and avant-garde fashion to the royal court, which caused quite a stir among the King’s earnest entourage. Despite her supporters and followers, some people were hostile towards her. One of them was the Dauphin Louis (future Louis XI), who insulted her in public and threatened her, leading the King to exile him to Dauphiné.

Château de Loches became one of her favourite residences. She gave the King three daughters, whom he officially recognised. Charles VII gave her spectacular gifts and estates, including the château of Beauté-sur-Marne which earned her the nickname, the “Lady of Beauty”.

She joined the King in Normandy whilst pregnant with her fourth child. Agnès Sorel died in childbirth at the age of 27 from dysentery. Her body was examined in 2005 and found to have mercury poisoning, but the cause was inconclusive. Crime or poor medicine?

Perhaps we will never know.

Charles VII had Agnès Sorel’s embalmed body transported to Loches. She was buried in Saint-Ours collegiate church, where her alabaster and marble tomb effigy can still be seen today.